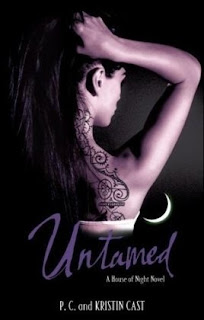 A word of WARNING: Although I do read the HoN books – I don’t actually think I could recommend them. They are filled with immature characters who aren’t all that bright and are my definition of the anti-role model. For some reason, I read them despite the fact I occasionally want to set them on fire.

Summary: Life sucks when your friends are pissed at you. Just ask Zoey Redbird – she’s become an expert on suckiness. In one week she has gone from having three boyfriends to having none, and from having a close group of friends who trusted and supported her, to being an outcast. Speaking of friends, the only two Zoey has left are undead and unMarked. And Neferet has declared war on humans, which Zoey knows in her heart is wrong. But will anyone listen to her? Zoey’s adventures at vampyre finishing school take a wild and dangerous turn as loyalties are tested, shocking true intentions come to light, and an ancient evil is awakened in PC and Kristin Cast’s spellbinding fourth House of Night novel.

Review: Untamed is a huge improvement from the car-wreck that was Chosen. For once, Zoey starts out with zero boyfriends – and zero friends, for that matter. A lot of the book is spent with Zoey trying to make amends – not sure whether or not she succeeds, to be honest – and introducing the new Big Bad.

On that front, Big!Bad!Kalona gets an intresting introduction in Untamed – but he will unfortunately become a real pain in the later books. One thing I did like was the character Stark – who has definitely become my front runner on the future-boyfriends-of-Zoey front. He’s an archer that can never miss, and he’s the only character in the book with a dog. *hugs* Aphrodite is as enjoyable as always – uber-bitch with a secret good streak – and gosh, don’t I wish the latter HoN books were in her POV…

Bottom line? Big improvement from Chosen, Untamed was really quite enjoyable. If you’ve made it this far, it’s a must.

St. Vladimir's Academy isn't just any boarding school--it's a hidden place where vampires are educated in the ways of magic and half-human teens train to protect them. Rose Hathaway is a Dhampir, a bodyguard for her best friend Lissa, a Moroi Vampire Princess. They've been on the run, but now they're being dragged back to St. Vladimir's - the very place where they're most in danger...

Rose and Lissa become enmeshed in forbidden romance, the Academy's ruthless social scene, and unspeakable nighttime rituals. But they must be careful lest the Strigoi - the world's fiercest and most dangerous vampires - make Lissa one of them forever.

Thoughts: This is – truly – a brilliant book. I had thought all the hype around it was over-the-top… I was so wrong.

Vampire Academy is not like most YA novels – hell, like any novel I’ve read. Although there is plenty of teenage realism – mean girls, cliques, and inappropriate kissage – the characters are at the same time very, very different to us. What we consider normal is not what they do – and where we place our priorities also differs from them. It’s odd, to not agree with a character but still understand them.

In fact, there was a lot of that in this book. Our main character, Rose, is exactly what I wasn’t in high school. She flirts with everyone, goes out partying all the time, and makes out with guys she doesn’t even care about – just for the thrill. This reckless edge does settle itself a bit in Vampire Academy, but it is still there even when she is behaving. You could say she is of the “punch first, ask questions later” variety. And even though I don’t personally understand this, I understand her.

Another really unique feature of Vampire Academy was the relationship between BFFs Lissa and Rose. You get this right from the start as Mead opens with a scene of the two of them. Although I literally swooned over both Dimitri and Christian, the Lissa/Rose bond was by far the strongest in the book.

The vampire universe also had a really nice twist to it. Mead managed to incorporate all sorts of issues – politics, drug abuse, and social class – into the verse without it seeming too contrived. She also managed to work in discussion about mental illness – which was an unexpected surprise. It is something I am very sensitive about, and I really appreciate authors who make an effort to get things right when they include it.

Bottom line? An amazing, addictive read. Mead creates gives a unique twist on vampires, and creates kick-ass characters to boot. Even if you are not a YA fan, go get yourself a copy!

This was the my (and final) read for the brilliant League of Reluctant Adults Mini-Challenge hosted over at Literary Escapism.  It’s been really fun – and I plan to do a little a wrap-up post to celebrate. ♥

Review: Hearts at Stake (aka My Love Lies Bleeding) by Alyxandra Harvey

On Solange’s sixteenth birthday, she is going to wake up dead. As if that’s not bad enough, she also has to outwit her seven overprotective older brothers, avoid the politics involved with being the only daughter born to an ancient vampire dynasty, and elude Kieran Black—agent of an anti-vampire league who is searching for his father’s killer and is intent on staking Solange and her entire family.

Luckily she has her own secret weapon—her human best friend Lucy—who is willing to defend Solange’s right to a normal life, whether she’s being smothered by her well-intentioned brothers or abducted by a power-hungry queen. Two unlikely alliances are formed in a race to save Solange’s eternal life—Lucy and Solange’s brother Nicholas, and Solange and Kieran Black—in a dual romance that is guaranteed to jump start any romance-lover’s heart.

Thoughts: Hearts at Stake is a fun debut novel but don’t set the bar too high when you pick it up. The action was entertaining, but not all that memorable. Plot turns and twist were all over the place, and kinda hard to follow. The world building consisted of tell-and-no-show. And as for the romance, well, both pairings fell flat.

But it was still an entertaining read! Harvey has a tongue-in-cheek style that I enjoyed – and we have to give her serious credit for creating the most violent vegetarian (Lucy) I have ever read! I also loved the relationship between the two narrators: best friends, Lucy and Solange. They are fiercely protective of each other, but extremely different. They work very well together, as whatever one of them lacks the other makes up for. It was a lovely dynamic!

It was released in the US with the cover/title you see before you… but in the UK they decided to rename it to My Love Lies Bleeding and gave it a Twilightesque cover. Usually I like the changes made by UK publishers, but not this time.

Hearts at Stake is a light-hearted, funny read. So although there is a lot of life-threatening violence… it is light-hearted violence! (If that makes any sense.) So, if you can, try to get a US copy (I got mine from Fobidden Planet in London) so that the content matches the cover!

Bottom line? This was a fun, light-hearted read – but I was not particularly in love. Pick it up if you are looking for a fast-and-fun read! The next book in the series, Blood Feud, is out in July. 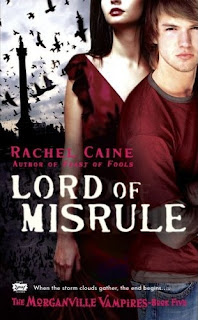 Summary: In the college town of Morganville, vampires and humans coexist in (relatively) bloodless harmony. Then comes Bishop, the master vampire who threatens to abolish all order, revive the forces of the evil dead, and let chaos rule. But Bishop isn’t the only threat.

Violent black cyclone clouds hover, promising a storm of devastating proportions as student Claire Danvers and her friends prepare to defend Morganville against elements both natural and unnatural.

Thoughts:  Lord of Misrule turns the entire Morganville series on its head – if you ever have to skip a book, make sure it isn’t this one! The relative comfort our characters used to live in has gone, and has been replaced with a war in the trenches. Any action that I might have felt was missing in Feast of Fools is made up for in Lord of Misrule – I gave up counting the life-or-death situations by page 30.

The action turns the entire town around, and the change brings out the hardness in all the characters – including Claire. I’d call some of her actions fierce, but I’d just be paraphrasing Eve (honestly, they are that fierce). I’d say Shane gets the biggest shake-up, character-wise. He had a lot of explaining to do in this book and, unsurprisingly, talking it out really helped with his new enlightenment.

Make sure you have a copy of Carpe Corpus on hand, because Lord of Misrule has the most jaw-dropping cliffhanger yet. And given Caine’s usual modus operandi, that is saying something!

Bottom Line?  You NEED to read this series! 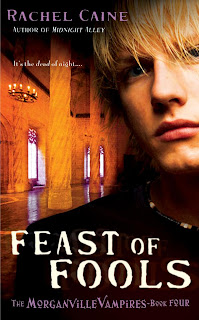 Summary:  In the town of Morganville, vampires and humans live in relative peace but Claire Danvers has never been convinced – especially with the arrival of Mr Bishop, an ancient, old-school vampire who cares nothing about harmony. What he wants from the town’s living and its dead is unthinkably sinister.

Thoughts: I love the Morganville Vampire series, and while this book is no exception, it wasn’t quite as extraordinary as Midnight Alley. After the shocking revelation in MA of the newest baddy in town – a Mr. Bishop – Claire is unfortunately back in the dark as to what on earth is going on in Morganville. Although it did wonders to build tension – I couldn’t turn those pages fast enough – it also made a lot of the book feel like a placeholder. Although we do get a resolution to the mystery – well, as much a Caine can write a resolution to her Morganville series – I would still recommend having a copy of Lord of Misrule on hand.

Now that I think about it, this book is the Morganville equivalent of Harry Potter and the Order of the Pheonix. Claire, like Harry did, spends the majority of the book utterly confused, then bang – big event – and all becomes clear. Obviously, Caine hardly sat Claire down to explain the verse to her, the way Rowling did to Harry – but the similarity is still there.

On to the great things in this book. Myrinn is as awesome as ever – eccentric, violent, and utterly adorable. Shane and Claire have their relationship is put to the test by the pull of her parents, and the introduction of a new vamp who takes an unfortunate interest in Shane. We also got a teaser as to the strengths that Claire may or may not possess (I’m not being cagey, I honestly don’t know). Lots of great emotional drama – although not quite as much plot as Caine usually manages to get into a Morganville book. Although if compared to other authors, it sure is action-packed!

Bottom line?  Not the best book in the series, but enjoyable none-the-less.  If you haven’t yet, make sure you get your hands on the Morganville Vampires Series ASAP!