Dark forces are at work at the House of Night and fledgling vampyre Zoey Redbird’s adventures at the school take a mysterious turn. Those who appear to be friends are turning out to be enemies. And oddly enough, sworn enemies are also turning into friends. So begins the gripping third installment of this “highly addictive series” (Romantic Times), in which Zoey’s mettle will be tested like never before. Her best friend, Stevie Rae, is undead and struggling to maintain a grip on her humanity. Zoey doesn’t have a clue how to help her, but she does know that anything she and Stevie Rae discover must be kept secret from everyone else at the House of Night, where trust has become a rare commodity.

Speaking of rare: Zoey finds herself in the very unexpected and rare position of having three boyfriends. Mix a little bloodlust into the equation and the situation has the potential to spell social disaster. Just when it seems things couldn’t get any tougher, vampyres start turning up dead. Really dead. It looks like the People of Faith, and Zoey’s horrid step-father in particular, are tired of living side-by-side with vampyres. But, as Zoey and her friends so often find out, how things appear rarely reflects the truth…

This was by far my least favourite book. It put the series on hold for me, and I likely would not have continued had it not been for the fact that I had already bought the rest of the series after reading Betrayed. I have to say, the books do return to the mediocre-yet-addicting quality of Betrayed… but you have to get past this thing first.

What made this book so bad was the unimaginable stupidity of Zoey. Along with this stupidity came the extraordinary stupidity of her friends – all of whom failed to realise that they were equally as dumb. In fact, the only one with any sense at all was Aphrodite… but of course no one listened to her because she is such a “poo-head.”

Bottom line? Read the a summary of the book on-line and then skip ahead to Untamed. 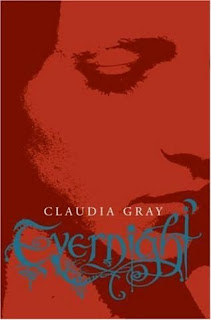 Summary:
Bianca wants to escape. She’s been uprooted from her small hometown and enrolled at Evernight Academy, an eerie Gothic boarding school where the students are somehow too perfect: smart, sleek, and almost predatory. Bianca knows she doesn’t fit in.

Then she meets Lucas. He’s not the “Evernight type” either, and he likes it that way. Lucas ignores the rules, stands up to the snobs, and warns Bianca to be careful—even when it comes to caring about him. But the connection between Bianca and Lucas can’t be denied. Bianca will risk anything to be with Lucas, but dark secrets are fated to tear them apart . . . and to make Bianca question everything she’s ever believed.

Thoughts: Let me start off by saying there was a point, just about half way through the book, when I was ready to write a five star review.  I was in love with Bianca – and more importantly, her parents.  They were a real family who enjoyed listening to Jazz and watching 1930s films.  They were perfect, and even Bianca, with all her teenage worry and angst, was lovable.  Watching her pine over the mysterious Lucas was just OMG-squeeful.

But a few pages leter, I wanted to rip the book to pieces.  Without giving away too many spoilers, let’s just say that there is a certain honesty one expects from a narrator.  And that Bianca had kept this particular secret for half a book… well, it just kinda made me angry.

After that, I just never really trusted any other characters.  I realised that I needed to be more forgiving – Gray had to write the story the way she did in order to succesfully develop the book.  But I still haven’t gotten over it… and that kinda hindered my appreciation of the rest of Evernight.  To be honest, by the time we got to the climax of the story I was so bitter I was rooting for the baddies!  I feel kinda bad about that now, and perhaps I should have taken a break from Bianca before finishing.

Bottom line? While I do think YA fans should pick up Evernight – brace yourself for a shock.  I already have a copy of the sequel Stargazer and have hope that I will love the entire book this time!

The underground population of witches, vampires, werewolves—creatures of dreams and nightmares—has lived beside humans for centuries, hiding their powers. But after a genetically engineered virus wipes out a large part of humanity, many of the "Inderlanders" reveal themselves, changing everything.

Rachel Morgan, witch and bounty hunter with the Inderland Runner Services, is one of the best at apprehending supernatural lawbreakers throughout Cincinnati, but when it comes to following the rules, she falls desperately short. Determined to buck the system, she quits and takes off on the run with an I.S. contract on her head and is reluctantly forced to team up with Ivy, Inderland's best runner . . . and a living vampire. But this witch is way out of her league, and to clear her name, Rachel must evade shape-changing assassins, outwit a powerful businessman/crime lord, and survive a vicious underground fight-to-the-death . . . not to mention her own roommate.

Thoughts: Dead Witch Walking is ludicrously well written – excellent pace, characterization, universe building, etc. etc. Harrison is a gifted writer and created one hell of a character in Rachel Morgan. She had plot twist after plot twist – constantly revealing something new and exciting about this amazing universe.

So why haven’t I given this book a five star rating? Well, mostly because it took me so damn long to finish it. I honestly blame this book for my book blogging slump, as it took me almost 2 months to finish! That is never a good sign.

What it all boils down to are the characters. And these characters I just could not care less about. I have read some reviews that claimed Rachel was the most annoying narrator they had ever read. This is an exaggeration. Anyone who has read the Werecats series by Rachel Vincent knows that Faythe knocks all competition out of the water. However, it is unlikely that you will grow to care about Rachel in this book. I sure as hell didn’t despite my very best intentions. Had the book finished with her death, I likely would have shrugged and moved on.

Bottom line? Read it for the universe – the Hollows is an amazing place. Also, the series apparently gets a lot better by the third book. Oh, and get the UK cover! The US ones are just disturbing.

Cassandra Palmer can see the future and communicate with spirits;talents that make her attractive to the dead and the undead. The ghosts of the dead aren't usually dangerous; they just like to talk; a lot. The undead are another matter.

Like any sensible girl, Cassie tries to avoid vampires. But when the bloodsucking Mafioso she escaped three years ago finds Cassie again with vengeance on his mind, she's forced to turn to the vampire Senate for protection. The undead senators won't help her for nothing, and Cassie finds herself working with one of their most powerful members, a dangerously seductive master vampire—and the price he demands may be more than Cassie is willing to pay.

Rec for people who love: old-school sexy vampires, and heroines you would actually enjoy spending time with.

First Line:  I knew I was in trouble as soon as I saw the obituary.

Thoughts: Once I got into Touch the Dark, I really enjoyed it. It has plenty of action, hot vampires and a solid plot. But it did take me a while. After an impressive showdown to start the book, we go through a lot of character introductions that, er, drag. It might not have been quite as noticeable if it hadn’t been for the fact that Chance is introducing us to people I felt I already knew. Being introduced to Cleopatra and Jack the Ripper would likely be a bit more interesting if they weren’t, you know, Cleopatra and Jack the Ripper.

Moreover, Chance has a really identifiable heroine in Cassie Palmer. I honestly haven’t a single thing to complain about with her – and seeing how hard it is to write a leading-lady that reviewers don’t want to shoot, it’s a rather impressive feat. Cassie has had some seriously horrible stuff happen to her in her short life, but she is not so fixated on getting revenge/answers that she throws away all her sense of self-preservation. In fact, she is probably the least “too stupid to live” heroine I have read in a long time.

Overall, I really did enjoy Touch the Dark. It was another keep-you-up novel with lots of action and a well-crafted plot. The slight romantic element actually got rather explicit without turning Cassie into a slut, or even dominating the plot – keeping the book very firmly out of the Paranormal Romance Genre. I am definitely getting the next three books in the series.

When sixteen-year-old Zoey Redbird gets Marked as a fledgling vampire she must join the House of Night school where she will train to become an adult vampire. That is, if she makes it through the Change. But Zoe is no ordinary fledgling. She has been chosen as special by the Goddess Nyx and discovers her amazing new power to conjure the elements: earth, air, fire, water and spirit. When Zoey discovers that the leader of the Dark Daughters, the school's most elite group, is misusing her Goddess-given gifts, Zoey must look within herself to embrace her destiny - with a little help from her new vampire friends.

Rec for: People over 17, and vampire chick-lit.

Thoughts: I was in a wee bit of shock for the first couple of chapters of this book. The teenagers are just such teenagers it was almost painful. Drunk, back-stabbing, swearing, fornicating teenagers.

I wanted to put it down – mostly out of shock – but what kept me going was the universe. In the acknowledgements at the start of the book, P.C. Cast thanks her editor for the words “Vampire Finishing School” – and I have to thank her too. They have created a very unique universe in an already saturated genre; kind of Harry Potter meets Anne Rice. Admittedly, I had to suffer through a variety of excruciatingly boring religious rituals before I could bring myself to appreciate the verse. Not only are the rituals long and tedious, but they also form a pretty central part of the story. Which means skipping ahead is a no-no if you want to understand what on earth is going on.

So, having said that, what did I enjoy? Well, the main character, Zoey, is a pretty likable gal who honestly wants to do what is right. Had we gone to school together, I would have really liked her – even though on paper she is a rather typical heroine. Her gang of merry men are also pretty adorable – and YAY for a gay teenager (her buddy Damien) being featured in a popular YA novel. Also, the token nemesis, Aphrodite, is extraordinarily villainous (although no where near as bad as Monica from the Morganville Series).

All in all, it was an OK book. There’s some potential in the series, so Betrayed is already in my basket!